Northern Harvest Sea Farms is a Canadian division of the Norwegian salmon fishing giant Mowi. In October 2019, Northern Harvest made a shocking announcement. A month earlier, they had lost 2.6 million Atlantic salmon – about 5000 metric tonnes – from their aquaculture operations on the coast of Canada. The fish had died due to a few weeks of excessively warm waters in early September. After a month of cleaning up dead fish in Fortune Bay, contracting a large number of divers and vessels to assist, the Managing Director of the company said they had finished 87 percent of the task – “The salmon mortalities comprise approximately half of all Northern Harvest fish in the water.” Half of the entire company’s inventory – gone.

The Government of India’s Neel Kranti Mission, also known as the ‘Blue Revolution’, is aimed at achieving economic prosperity for fish farmers as well as contributing towards food and nutritional security. It’s a noble plan, given the well-documented challenges of farmers’ incomes and job creation which exist across the country, as well as the additional dimension of malnutrition. According to India’s 2015-2016 National Family Health Survey (NFHS-4), more than half of women and children in India are anaemic, while myriad studies have pointed out poor overall nutritional leading to a condition known as protein energy malnutrition. These are debilitating conditions which affect height, weight, cognitive development, energy levels, and the ability of our population to shape their own destiny – and India has among the highest cohort rates of these deficiencies anywhere in the world.

These are the critical challenges countries like India face – food insecurity, malnutrition, and economic growth. On World Ocean Day 2020, in the depths of the Covid-19 pandemic, it’s worth asking the critical question: by tackling these crises via the paths we are currently treading, are we simultaneously increasing the likelihood of climate change, antimicrobial resistance, and future pandemics?

The Government of India’s Neel Kranti Mission, also known as the ‘Blue Revolution’, is aimed at achieving economic prosperity for fish farmers as well as contributing towards food and nutritional security. Image: Getty

I’ve written in the past about how relying on industrial animal agriculture for protein is breaking the planet. Chickens, the most efficient terrestrially farmed meat and most highly demanded in countries like India, take in 9 calories of input in the form of crops like soy, wheat, and corn, for every 1 calorie of output in the form of meat. Because of all the steps involved in growing those crops and feeding and slaughtering animals, chickens also emit 40-60x more carbon dioxide per calorie of protein than lentils, and animal agriculture contributes more to climate change than the emissions of all transportation on earth, combined. This is why scientists at the United Nations’ Food and Agricultural Organization estimate that raising animals is “one of the top two or three most significant contributors to the most serious environmental problems”. But as discourse about climate change thankfully continues to become more mainstream, oceans continue to be neglected as an area of focus.

Across the globe, ever-accelerating overfishing and harmful fishing practices have damaged fragile marine habitats, destabilized ocean ecosystems, and severely depleted global fisheries — with over 90 percent of wild fisheries classified as ‘overfished’ or ‘harvested at maximal capacity’. As fisheries near coasts are depleted, more seafood is harvested from regions where regulations are difficult to enforce despite the best of intentions for sustainable management strategies. What’s more, a 2016 review of more than 200 studies from 55 countries found that at least 1 in 5 seafood products is mislabelled – which means that bluefin tuna or beautiful Atlantic salmon you think you’re eating is actually something else. Some countries like Canada had as high as 44 percent mislabeling! It’s clear that the seafood supply chain has a major visibility and sustainability issue.

In addition to these challenges, the farmed seafood industry is rife with the risk of pathogens. Virus outbreaks on shrimp farms terrify farmers, while other viruses have cost the salmon aquaculture industry in Chile over $2 billion and 20,000 jobs. These events mirror similar issues in terrestrial animal agriculture, where African swine fever in pigs and avian flu in chickens inflict tremendous losses on farmers and erode consumer confidence. A looming twin threat, antimicrobial resistance due to large-scale use of antibiotics, may cost the global economy up to $100 trillion by 2050. 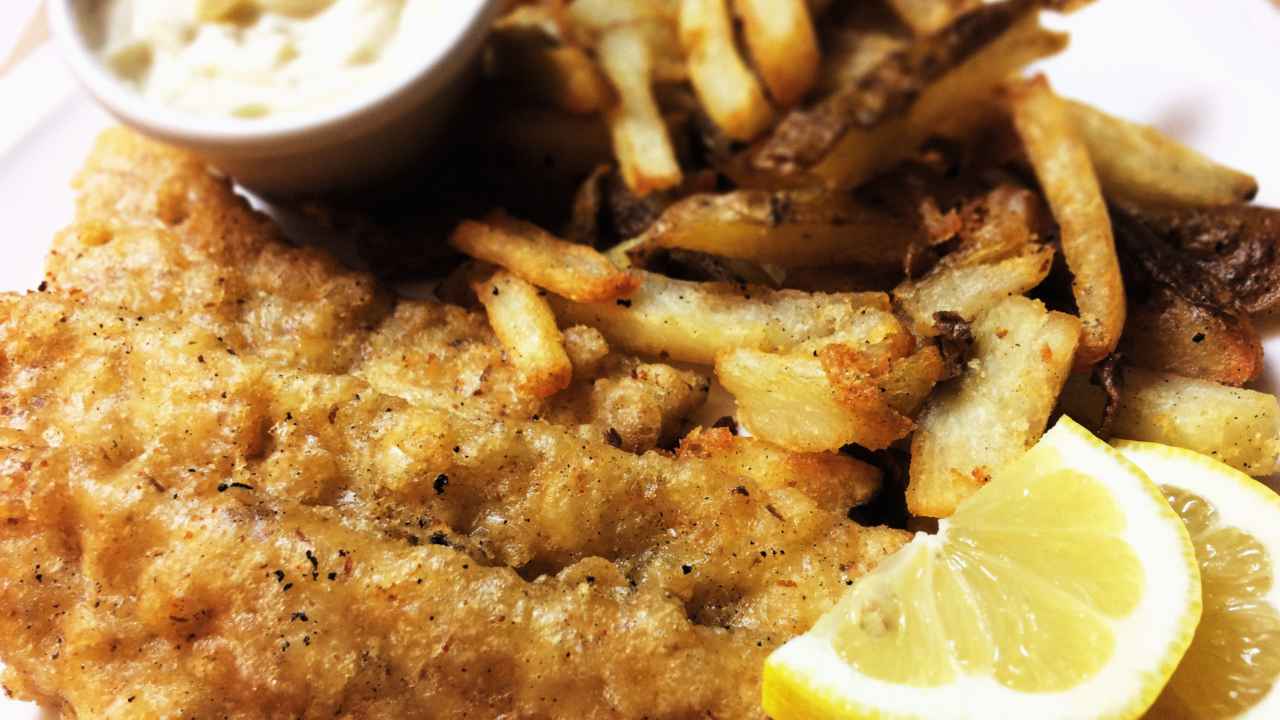 Vegan fish and chips, among a sea of alternatives already in the market and in restaurants today, are available today – albeit with limited access in India. Image: Vegan Food Lover

Covid-19 has underscored that these risks are very real – and mitigating the risk of future crises from pandemics and climate change is absolutely imperative. We simply cannot continue with business as usual. But despite these pressing threats to the environment, global food security, and livelihoods, as well as risks to consumers from chemical and pathogenic contamination, fraud, and a lack of regulatory oversight, global demand for seafood continues to increase. Fulfilling that demand, particularly in countries like India, will require visionary leadership which allows us to sidestep, or leapfrog, the harms of scaling up fisheries and aquaculture altogether.

The exciting sector of alternative protein is currently soaring to new heights globally, and represents immense opportunity to enable that transformation. Plant-based foods are made entirely from crops or plants but have the same texture and taste as meat, eggs, and dairy; ingredients derived from fermentation, such as fungi and algae, show huge promise in cost-competitiveness and nutrition across these categories; cultivated meat, which consists of farming cells directly instead of farming and slaughtering animals, is rapidly coming to market. These foods are vastly more efficient to produce, and do not suffer from the same risks of public health and sustainability. They expand choices for producers and consumers, and offer the same cultural and sensory resonance. Put simply – they must taste the same or better, and cost the same or less, so that people can make a simple switch rather than a sacrifice.

Our State of the Industry Reports reveal meteoric growth in investments across the landscape, centered primarily in the US but steadily expanding outward and into Asian markets. Consumer demand for plant-based foods has skyrocketed, and legacy animal meat producers are future-proofing their businesses – 9 out of the top 10 US meat producers have made investments in plant-based meats. Expat Indian founders, like cultivated shrimp startup Shiok Meats’s Dr Sandhya Sriram, are winning plaudits for their early leadership in the sector. But just as in climate change advocacy, oceans and seafood are neglected within this landscape. Relative to the size of our marine challenges and their importance to the fate of our planet, an alarmingly minuscule sum has been invested thus far in plant-based, cultivated, and fermentation-derived seafood replacements.

If we want to push back against climate change, and stave off future crises similar to Covid-19, oceans can no longer remain neglected. Our stewardship of the planet for future generations must encompass a future with sustainable oceans of abundance. Accelerating the development and commercialization of scalable, reliable alternative seafood products that compete on taste, price, accessibility, and nutritional quality with their ocean-derived counterparts should, therefore, be central to nourishing 10 billion people by 2050. This salmon dish from the tasting menu at Olympia Oyster Bar in Portland, Oregon is made from cultivated salmon and not farmed salmon – the meat is propagated/grown from salmon cells. Image: Rachelle Hacmac/Wild Type

The nascent alternative protein sector is driving job creation and income for farmers all over the world, in countries like Canada, Singapore, and Israel, where alternative protein is a central piece of their future-proof food security story. The same can be true in India – particularly with our tremendous advantages in biodiversity and agro-climatic zones.

If we act now to build an enabling ecosystem for research, entrepreneurship, and corporate investment, we could create an affordable, sustainable supply of seafood without sacrifice. We could balance the competing crises of food security and planetary health, and transition rapidly from our world of scarcity to one of abundance. But we need to take the first visionary leap.

The vitality and, ultimately, the survival of our oceans depends on it.

The author is the Managing Director at the Good Food Institute India. The Good Food Institute India (GFI India) is a part of an international network of nonprofits spanning India, Brazil, Israel, the US, Singapore, Greater China, the UK and the EU. Since its establishment in 2017, GFI India has rapidly emerged as the central thought leader and convening body in the space of plant-based, cultivated, and fermentation-based meat, eggs, and dairy – also known as the ‘alternative protein’ or ‘smart protein’ sector – in the country. GFI India’s dedicated expert teams in Science & Technology, Corporate Engagement, and Policy have worked on activities including organizing national summits, disseminating open access scientific information via white papers and webinars, establishing India’s first Centre of Excellence in Cellular Agriculture in partnership with the Institute of Chemical Technology, Mumbai, and stimulating world-leading alternative protein research by engaging universities and government. Please visit www.gfi.org.in for more details.