Editor’s note: This article is the second of a multi-part series which examines how the COVID-19 lockdown has impacted one of the most backward districts in Maharashtra and the most disadvantaged section of the society living on the outskirts of Mumbai. Read Part I here

Suresh Kawa, 31, stops just short of using the word “burden” for his nine-year-old son. No father would do that.

“But we toiled to arrange meals for two people earlier,” he says. “We now have to do it for three. It is particularly difficult in the middle of a lockdown.”

“His meals were taken care of at the residential school,” says Suresh, sitting outside his one-room hut. “The struggle for survival has intensified with his return. I feel guilty accepting that.”

Living in Taralpada, one of the poorest tribal hamlets in Palghar’s Jawhar taluka, survival has never been easy for Suresh, who belongs to the K Thakar community. He cultivates rice during monsoons on a two-acre plot to feed his family and himself.

With the lack of any irrigation facilities, the family can only rely on rainwater for farming. Since they don’t grow winter crops, Suresh migrates for work after Diwali once the rice is harvested. And returns only around June. This is a practice almost every Adivasi family in Palghar follows — they move to construction sites in Thane or brick kilns in Bhiwandi and nearby areas during Diwali because farming is not a viable option through the year.

“I get Rs 350 per day as a migrant worker in nearby towns,” he says. “Sometimes you get work, sometimes you don’t. It is uncertain. We basically live hand to mouth.”

Even that has not been possible since Prime Minister Narendra Modi announced a nationwide lockdown to contain the spread of coronavirus on 24 March. More than five months later, even as the Maharashtra government embarks on the “Mission Begin Again”, Suresh is still struggling to get back on his feet. “I am happy to spend more time with my son,” he says. “But I can’t deny that an extra stomach to feed in these times is a challenge.” Suresh is not the only one living this nightmare. There are over 1,100 residential schools with about 5 lakh tribal students enrolled in Maharashtra. While more than 60,000 Zila Parishad (ZP) schools host 4.6 million students. Besides offering free education, the mid day meal scheme is one of the major incentives why parents send their kids to Zila Parishad schools, where at least one meal of the child is taken care of.

Most of the students in these schools come from families of farmers and labourers belonging to some of the most marginalised sections of the society. They cannot afford private education. With Adivasi residential schools and Zila Parishad schools shut due to COVID-19, these children are back to their homes, living with their parents, who now have to arrange food for the extra mouth.

Nowhere in Maharashtra is the crisis among children starker than in Palghar – a district with a population of 3 million, 37 percent of which comprises Scheduled Tribe, much more than Maharashtra’s 9.4 percent. In Jawhar taluka, where Suresh lives, over 91 percent of the population is Adivasis. Even though Palghar is barely 100 kilometres from Mumbai – the financial capital of India – it is one of the most backward districts in Maharashtra, where malnutrition is a serious concern that stems from abject poverty. Between 2016 and 2018, more than 1,100 children in Palghar have died of malnutrition. In February 2019, the journal PLoS published a report that found 59 percent of children up to age six were stunted and 53 percent were underweight.

Children in Palghar are undernourished because they do not have access to an all-round meal, which should include carbohydrates, protein, fat, minerals and vitamins. The children studying at Zila Parishad and residential schools returning to their families compound the existing problem of malnutrition. The coronavirus-induced lockdown has further exacerbated the crisis of undernourishment among the marginalised in Palghar. At least, 213 children from Palghar were listed under the severe acute malnutrition (SAM) category in April 2020, which, in just two months, has gone up to 23. In Jawhar taluka, that number has increased from 78 to 94, a 19 percent jump. Experts believe the numbers could rise further if there is no intervention from the state.

A few metres from Suresh’s home lives the three-year-old Umesh Bhambre. A bit skinnier than other children his age, his mother Pramila says he gets tired very soon. “With no money at home, we can’t buy green vegetables,” she says. “We mostly feed him rice and dal because that is the only thing we have.”

Umesh is 77 inches tall, but he weighs only 7 kgs. He also falls under the category of MAM. Taralpada has no dearth of under-nourished children like Umesh who are in desperate need of a healthy and nutritious diet. In 2015, to counter malnourishment, the Maharashtra government had started the APJ Abdul Kalam Amrut Aahar Yojana that provided pregnant women and lactating mothers in tribal areas with a one-time all-round cooked meal. It included rice, daal, two vegetables, an egg and rotis. The scheme also provides 16 eggs per month to a child up to the age of seven.

Living below the poverty line, the residents here have the facility of the Public Distribution System, where they are eligible for 25 kilos of rice and 10 kilos of wheat at Rs 3 and Rs 2 per kilo respectively every month. Besides, there is also the ‘Take Home Ration’ scheme for children up to 3 years, which includes chana, masoor dal, rice/wheat, turmeric powder, red chili powder, salt and soyabean oil. However, Indavi Tulpule, an activist with the Shramik Mukti Sanghatna that has been raising awareness about malnutrition in tribal areas in Maharashtra, said when it comes to health and nutrition, the government schemes are often starved for resources and are not implemented well on the ground.

“There are different departments handling different schemes that lack coordination,” she says. “The Tribal Development Department funds the Amrut Aahar Yojana. Integrated Child Development Scheme implements it. The mid-day meals come under the education department. The departments don’t coordinate with each other. Additionally, funds often come in months after they are allocated. Basically, the system that was fundamentally weak has been dismantled with coronavirus.”

Except for the Centre’s scheme of providing a meagre five kilos of grains per person every month, the authorities have not extended much help to the poor to survive until the economy opens up.

Pramila says the food they get from government schemes hardly lasts more than 10 to 12 days. “What do we eat for the rest of the month?” she asks. “I have a seven-year-old son. I can’t feed one kid and starve another. Plus, we are labourers. We toil day in day out so our appetite is on the higher side. We are not afraid of the virus as much as we fear the economic hardships. We need work.” 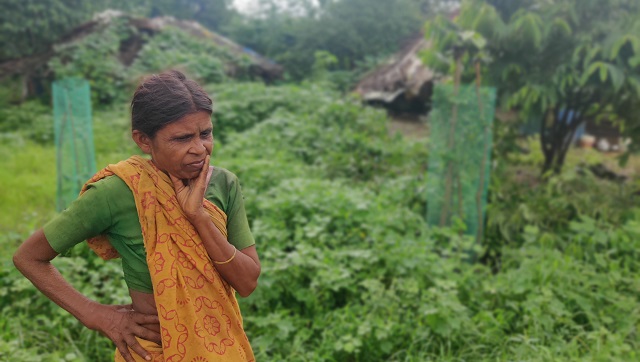 In May 2020, Kashtakari Sanghatana, a civil society organisation that works for labour rights in Palghar, had organised a protest against the loss of livelihoods. The protestors demanded work under Mahatma Gandhi National Rural Employment Guarantee Act, 2005 (MGNREGA) that promises 100 days of work to unskilled labourers in rural areas. Before the COVID-19 lockdown, villagers said they occasionally found odd jobs under MGNREGA but since March, there have been no opportunities.

The unavailability of unskilled work has paralysed Dharanhatti — a village at a 10-minute walk through the potholed and forested roads from Taralpada. It is a village of people who belong to the Katkari tribe, which is among the three particularly vulnerable tribes out of the 47 in Maharashtra. They survive only on labour work.

Sixty-year-old Shevanti Savara, a resident of Dharanhatti, says the adults in her family slept empty stomach the previous night because the food was not enough for everyone. “We prioritise my four grandkids as much as possible when it comes to food,” she says.

Her three-year-old grandson, Avinash — bare-bodied, abnormally thin with a paunch — the activists this reporter was travelling with, looked at the child and immediately said he falls under the SAM category. “The food at home isn’t enough,” says Shevanti. “The schemes may be meant for children up to a certain age but when we get the food, we have to distribute it among all the children. We are a village only of labourers. We have no farmlands. Without labour work, we can’t make our ends meet.”

For people who survive on daily wages, a week without work causes panic in villages like Dharanhatti. It has been five months since the lockdown now. And last week, some of them resorted to their final option: begging.